Celebrating the 10th year of Prague's annual festival of digital creative culture, we were invited to contribute a series of works to be displayed at the newly opened Kunsthalle gallery. PHOTOSYSTEM II is a 6-piece series of animated video, first shown during  the 4-day festival and then extended to be on display at Kunsthalle for 3 additional months. We created a series of works driven by our fascination with the process of photosynthesis, with each piece posing new interpretations and musings of the power of plants. Without light there is no life. Light is essential for plants to convert carbon dioxide and water into oxygen, in the process we know as photosynthesis. Without it, there would be no world around us: photosynthesis is the foundation that has allowed Earth to evolve into the biodiverse, oxygen-rich, green planet we know today. Viewing plants as fascinating, sophisticated systems can help us understand how they adapt and live in harmonious symbiosis with others.

The PHOTOSYSTEM II installation consists of a series of large-scale projections that represent the phenomenon of photosynthesis through different interpretive lenses. It features an immersive fly-through projection of the eternally flourishing evolution of biodiversity, alongside manmade objects constructed with living organisms. An interactive work, which responds to the movement of visitors, grows tendrils and releases oxygen. Plants are presented as alluringly complex systems of adaptation, and as integral components of biodesign. A glimpse into the intricacies of photosynthesis can be surprising: we can learn, be inspired and discover novel ways to solve today’s pressing problems. 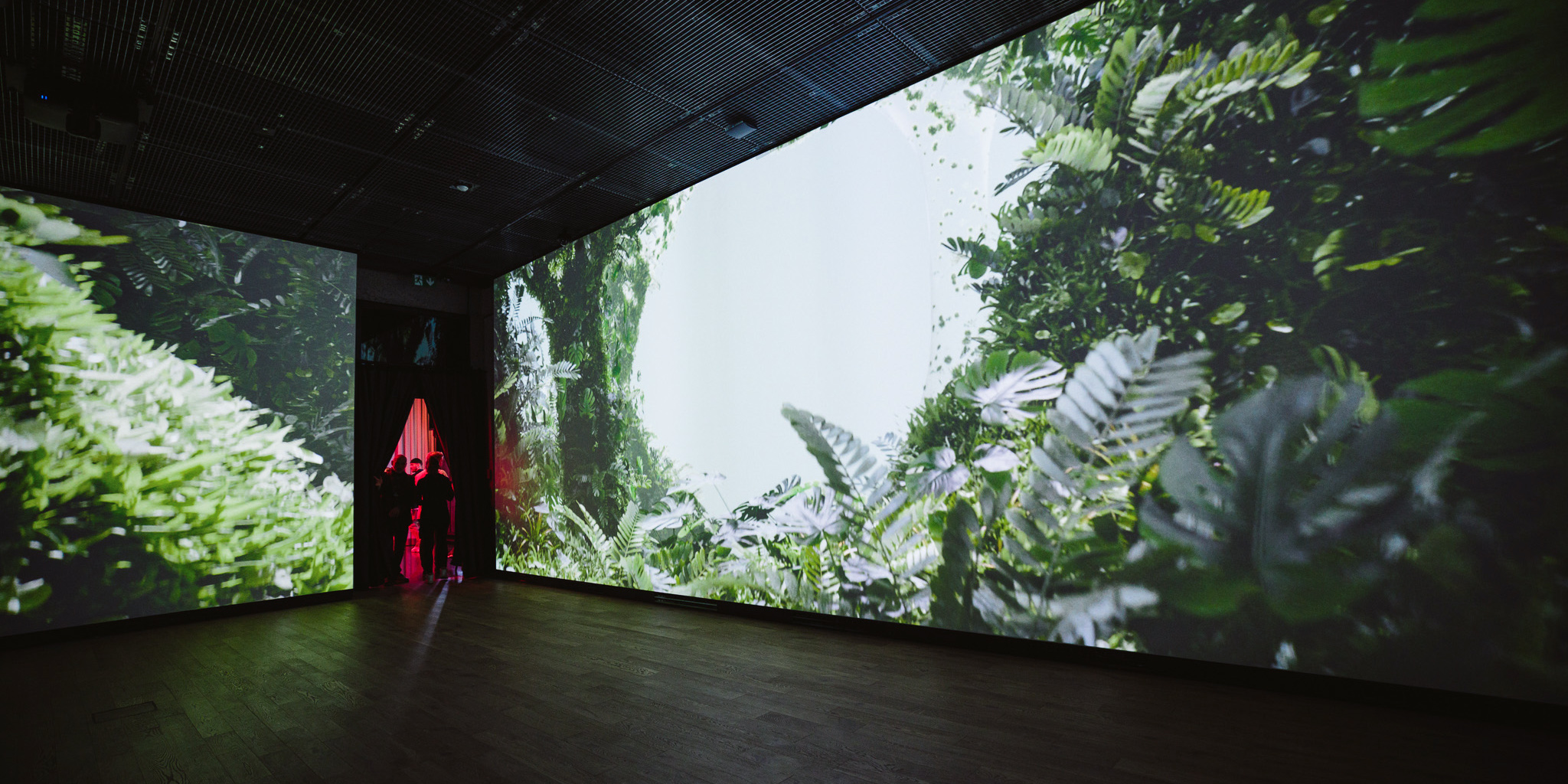 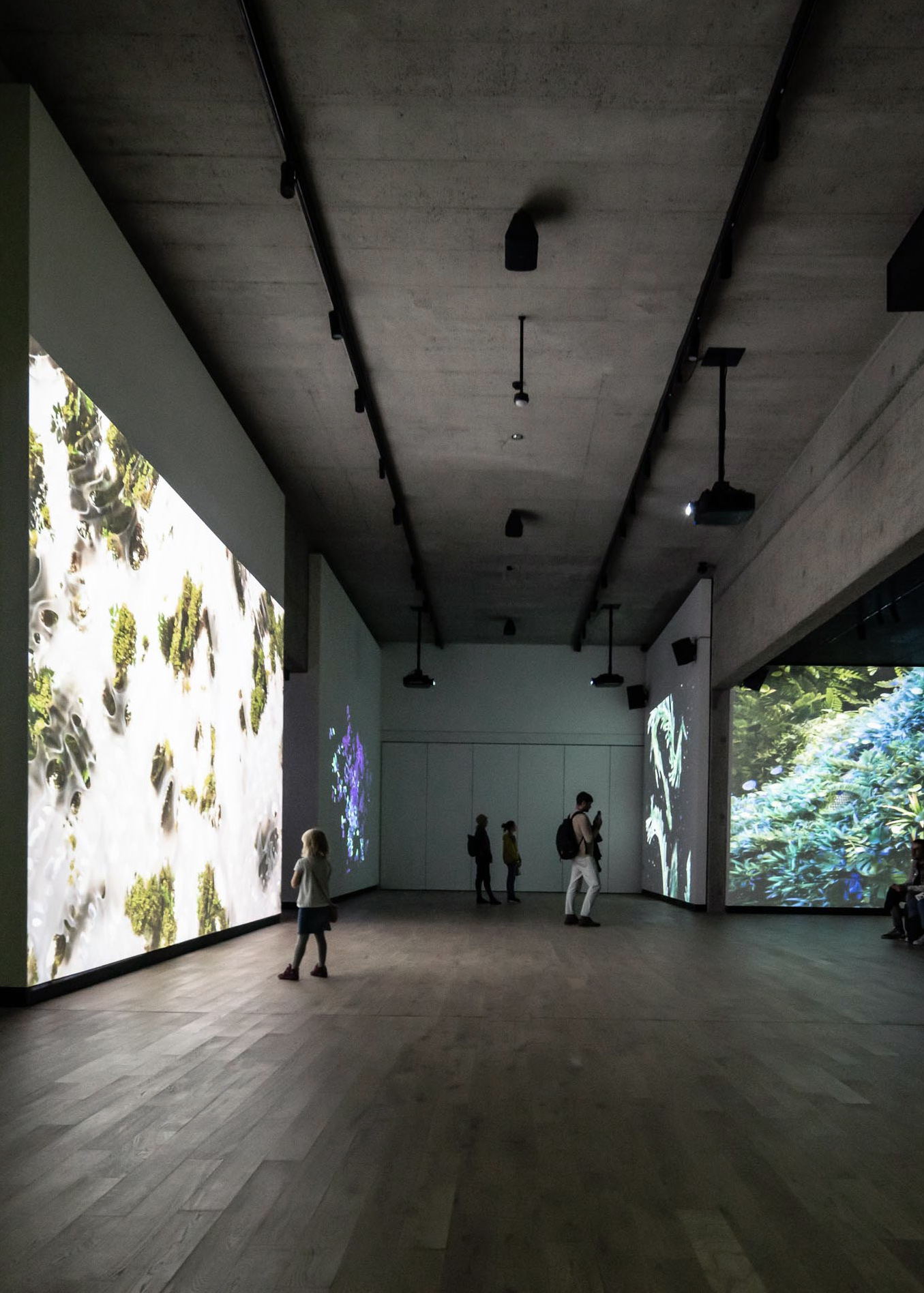 PHOTOSYSTEM II
‍
The namesake piece of the series, Photosystem II is a room-sized immersive projection that wraps around three walls to hold the viewer in its leafy embrace. The animated film progresses in complexity and scale - from a waving sea of singular sprouts to massive manmade structures spilling over with an abundance of greenery. It references the continuous and ongoing evolution of biodiversity, which all started with a single-celled organism that learned to photosynthesise. We are reminded that symbiosis is the fundamental driver of evolution, and that symbiosis must itself evolve too. As the world around us and the organisms within it become more complicated, plants too must change to keep up. The fly-through of organic matter cycles through various states, suggesting that the human chapter on earth is a mere blip in the 3.4 billion years that organisms have been photosynthesising for. Clusters of bacteria swill around a borderless space, flashing with binary hues of green and purple. The individual rods cooperate through transfers of illuminated colour, with waves of green transmitting outwards from the collective mass. The work is informed by research into ‘infobiology’, and whether it is possible to store data in biological material. Indeed, experiments have found that one gram of e-coli has a storage capacity of 900 terabytes. Projected across multiple planes and without borders, data is everywhere and in everything. The bacteria move with the subtle influence of a turbulence, but it is the snappier secondary rotation that is more prominent. The group of bacteria appears to be under inspection, being grasped and turned as if to get a better look. The curiosity of infobiology is poignant in a time where data is one of the world’s most valuable commodities.

In Plastic Diet, we look into an ocean tank filled with tendrilled creatures twirling past one another. The figures dart around the space among glittering bits of debris, which attach to the sweepers on contact. The mundane task of garbage collection here becomes a glitzy underwater waltz. The work is inspired by newly discovered plastic-eating bacteria, and suggests a future where these organisms have evolved to become self-propelling beings with an appetite for microplastics. As with many things, the solutions to today’s problems are yet to be invented, or evolved. Through photosynthesis, some organisms have evolved to consume plastic waste as their primary carbon source. Plastic Diet also highlights that trees and leafy plants are not the only organisms capable of photosynthesis - in fact, nearly half the oxygen we breathe is generated by ocean-dwelling bacteria and algae. As if part of the architecture of the room itself, the Living, breathing wall, pulsates slowly with micro-herb growth. Silhouetted figures moving behind the structure appear to be in the gallery space itself, walking where the viewer may have been wandering themselves just moments ago. The membrane-like wall is comprised of 3D geometry generated using voxel-building algorithms based on gyroid laws of minimal surface. Gyroid structures are infinitely connected and have no straight lines, found in nature in butterfly wings and lipids. The resulting geometry was then rendered with a soft, milky material, in what became an entirely CG process of biomimicry. This hyper-real green wall blends into the space with its soothing ambience, contributing to ideas of a future where natural systems can coexist with humans in everyday places.

THE ROOTS ARE THE BATTERY

Framed from a low angle, the absence of soil provides a novel view of branching roots. The intertwining limbs with their crooked fingers twinkle in the sunlight that weaves through from above. The roots are rendered as hundreds of thousands of multicoloured particles, packed together to bejewel the usually dirt-covered structure. It rotates slowly and constantly, allowing us to marvel at this otherwise unseen part of the plant. Light beams that run along the spines of the smallest roots charge inwards and upwards, a quiet, constant pulse that moves what it absorbs and what it stores. Referencing the functional importance of roots, the light animation highlights the storage of energies created through photosynthesis, as well as the transfer of nutrients that travel from the earth to the rest of the plant. PART OF THE EQUATION (Interactive)

Part of the equation, a collaboration between Zünc Studio and Lukas Drevjany, is an interactive piece that allows the viewer to participate in the process of photosynthesis. Motion sensors pick up the movement of visitors walking along the expanse of the screen, or extending their arms in front of it, from which tendrils begin to spurt and oxygen bubbles are released. It recalls the 8th-grade science equation for photosynthesis: carbon dioxide + water + light = glucose + oxygen. Humans (and other organisms) are indeed essential to photosynthesis with our ability to bring carbon to the mix. It is the presence of the spectator that initiates the exhalation of oxygen and creeping vines. At the same time, being reduced to a greenish silhouette emitting bubbles and growing fronds is humbling - a reminder that we are entirely dependent on photosynthesising plants for our own existence.